Close
Home > Blog > All About Glaciers

Glaciers are impressive natural formations. Massive and always on the move, glaciers are nothing short of magnificent. Scientists learn an incredible amount of information from glacial ice about historical precipitation and temperature cycles, atmospheric chemistry composition, solar variability, volcanic eruptions, and other scientific things. But wait! There is plenty to learn, even for the non-scientist: 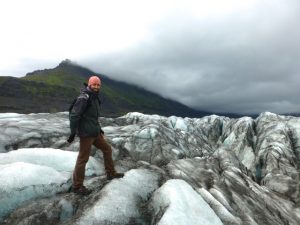 What is a glacier? Glaciers are slow-moving “rivers” of ice, and there are two types. Most are Alpine glaciers, which form at and around mountain summits. Continental ice sheets, however, (of which there are only two in the world in Greenland and Antarctica) spread out over large, flat areas. While the presence of a glacier at any given location can be millions of years old, the actual ice is usually “only” tens of thousands of years old, since new snow accumulates as the older ice melts. However, the oldest ice on Greenland’s ice sheet is estimated to be about 1 million years old! 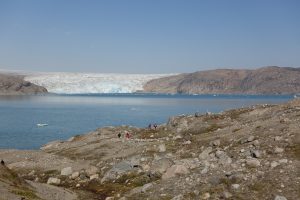 How are glaciers formed? The formation of a glacier happens over hundreds and sometimes thousands of years. Snow accumulates, and after some time, it builds up enough that the weight compresses the snow into ice, then it starts to move.

How do glaciers move? The simple answer is that gravity pulls them down. However, meltwater from the surface runs through to the bottom and acts as a lubricant, of sorts, helping to slide it along. Glaciers move at varying rates anywhere from about 1 foot in a year to almost 100 feet a day! 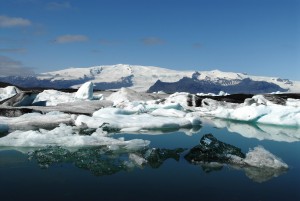 What happens to glaciers at the terminus (the end of the glacier)? They break up into smaller chunks of ice, and if it’s near the water, we call these chunks icebergs. In fact, most of the icebergs in the world come from just two places—Antarctica and Greenland. It’s likely that the iceberg that sunk the Titanic was from Greenland and had floated 5,000 miles from where it was calved.

What do glaciers do? Lots! Glaciers have shaped, and continue to shape, the landscape. They erode the earth as they pull black and move forward. Valleys that were once V-shaped are rounded into a U-shape. In addition, glaciers drag and drop tons of rocks in the process. 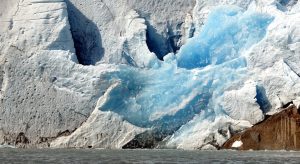 Why do glaciers sometimes look blue? This has to do with the ice and snow being compressed over time. The pressure squeezes out any tiny pockets of air between the ice crystals, which makes the ice more dense. The denser the ice the more blue light that’s reflected. Generally-speaking, the older the glacier, the bluer (and denser) the ice.

Any other fun facts? Glaciers are incredibly sensitive to temperature fluctuations, so as the climate warms, glaciers are melting faster than the accumulation of new snow. Glaciers also hold about 75% of the world’s fresh water. So, if glaciers melt, not only would that threaten our supply of fresh water, but sea levels would rise by over 200 feet! On a lighter note, a brewery in southern Greenland makes beer from glacial ice, so that’s pretty important, too.

Where can you see glaciers? You can walk on a glacier in Norway and Iceland and see glaciers on the Tour du Mont Blanc, Haute Route, and Patagonia Hiking Adventure.