What do you get when you travel through three countries with some of the best culinary traditions in the world? A gastronomic delight of immense proportions.

While the Mont Blanc region spanning France, Italy, and Switzerland is known for big cheese names such as Gruyere and Fontina, there are many smaller cheesemakers that produce specific cheeses from individual valleys, and in some cases, a single village! Visiting Le Refuge Payot cheese shop in Chamonix, you’ll definitely come across cheeses you’ve never heard of and are unlikely to find outside of France. And FYI, generally, you can bring cheese into the U.S. as long as it’s not runny. 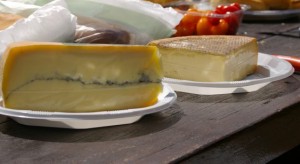 During the Tour du Mont Blanc and Haute Route, you may taste Gruyere or Comte, both harder, alpine-style cheeses made from raw cow’s milk and aged anywhere from 60 days to a couple of years. The flavor changes depending on whether the milk was made from spring milk or fall milk, as the grasses, flowers, and weeds the cows graze on in the mountains are different in each season. You’ll probably also have some Morbier, a semi-soft cow’s milk cheese with the characteristic line of vegetable ash in the middle. It’s rich and creamy. Reblochon may be a bit stinky, but it’s light and nutty and one of the most popular cheeses of the region. 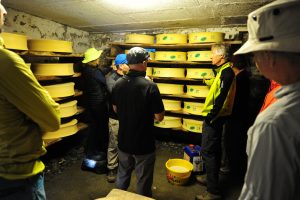 On our Tour du Mont Blanc trip, you will definitely have Beaufort because our guides know the cheesemaker, so we stop there on the way to the trailhead. We tour their small operation and enter the aging room to get some freshly cut wedges. This cheese is similar to Gruyere and Comte but made in a particular shape and only in the Beaufort municipality. 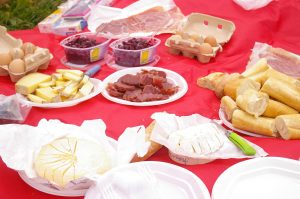 Each morning, as the group readies for the day’s hike, our guides will pull out wheels and wedges of cheese (plus accompanying baguettes) to divvy up between everyone’s packs for a picnic lunch later in the day. Knowing you have a wheel of delicious, perfectly ripe cheese on your back, just waiting to be enjoyed, may make you hike just a little bit faster!

A typical dish you may see on menus in Chamonix is Raclette. This is both the name of the dish and the name of the cheese. A half wheel of cheese is brought to the table and melted under a broiler. When the top layer gets gooey, you tilt the wheel, scrape the melted part onto a plate and eat it with ham, bread, or potatoes. Then put it back under the broiler for the next round. Just like fondue (which you’ll see in Zermatt at the end of the Haute Route) it’s rather decadent and a lot of fun when everyone partakes. 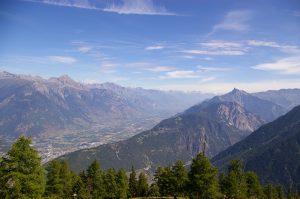 Now, on to the wine. Unless you know the region really well or have a particular preference, I’d recommend letting our guides order the bottles at dinner. They really know their stuff…it seems almost instinctual for French people. The vineyards in this region cling to the steep hillsides, and the area just south of the Italian town of Courmayeur is home to the highest elevated vineyards in Europe (almost 4,000 feet!). Many of the lesser-known grape varieties are rarely found outside the Mont Blanc region.

Some varieties that you may be familiar with include Sauvignon Blanc and Gamay from the area around Geneva; Syrah from Valais (Switzerland’s largest wine producing region) in the Rhone Valley; Altesse and Mondeuse from France’s Savoy region; and Pinot Gris and Pinot Noir from the entire area including Italy’s Aosta Valley. It’s such a concentrated area for wine producers, you can try a different type each night. Definitely go beyond the well-known varieties because you may not find some of these wines again as many of the small wineries don’t export! 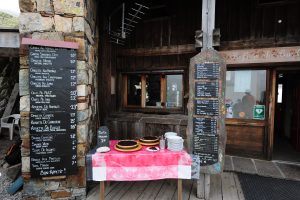 It’s a good thing both of our Alps tours involve a lot of hiking and comfortable beds at night to burn off the cheese calories and sleep off the wine. And besides those two things, the rest of the cuisine really punctuates an already fabulous trip. From homemade pastas and risotto in Italy, to blueberry tarts and croissants in France, to lake-caught fish and hearty stews in Switzerland, you certainly won’t go hungry! And with advance notice, we can accommodate dietary requirements.

If you like cheese, wine, and being in the mountains, you need to hike in the Alps.