As Boundless Journeys’ Bhutan and Nepal destination manager, I’ve had the privilege and pleasure to both travel in the region and help other people discover these culturally-rich and breathtakingly beautiful countries. After every group returns, I always hear from our guests who say how inspirational and life-changing their journey was.

A few months ago, I received two emails from guests on a custom hiking trip to the Himalayas. Each email contained an incredible snapshot of their adventure, and I was thrilled to be allowed a glimpse into their experience. It’s moments like those that keep me and my Boundless Journeys colleagues addicted to exploring the world, and I wanted to take a moment to share these stories with you.

Nepal: “We spent a week with a shaman” 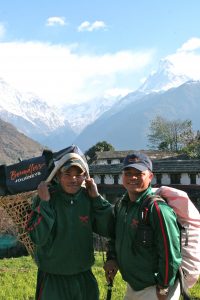 Two of us trekking in Nepal with a guide and a porter. We speak no Nepalese. The guide speaks English and is an excellent resource for information. The porter occasionally says something in English we sort of sometimes understand. The porter is carrying on his back a very large basket with all sorts of gear, the weight of which is singularly suspended on a rope that goes around the base of the basket to a small band on the top of his head.

As we hike the mountain trails, we occasionally come upon Nepali travelers. At times, the porter puts down his basket and seems to chant and touch them. He is a shaman. Our first. He had a dream offering to teach him this special healing power. He accepted and thru dreams learned.

We watched in silence as he touched and chanted. One old blind man was being carried in a basket home from the hospital where western medicine had no answer. We could feel the positive energy as the treatment occurred. The shaman believed he could help, the old man similarly believed, and we, too, felt relief was available for the man’s suffering.

And over time we felt the love and compassion in the eyes and face of the shaman. Something truly special, mesmerizing, sincere, sharing, and comfortable. When you looked into his eyes you felt your mother’s love. We recalled that in our almost 140 years of combined living we had seen those eyes and face very rarely.

Bhutan: “Lord of the Estate” 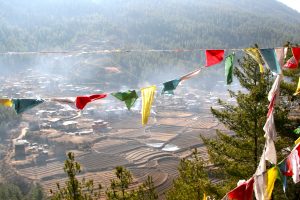 In this highly isolated, extremely mountainous part of the world, warring tribes and factions spent generations carving out their own territory and then defending it from neighboring tribes. Land ownership and power was vested in powerful regional families who owned the land and controlled the people who worked on their land. In the mid-1950’s the third King instituted an end to this power structure. All people were declared equal, and the exclamation point to this equality was land reform, which declared that all had a right to land ownership with a maximum holding of 25 acres. The surfs were freed, and as far as we can tell, the change was accepted.

One day, we left the “luxury” of the single track semi-paved highway that crosses Bhutan and drove an hour and a half on a dirt rutted road to visit a feudal village. Located on the brow of a hill at the end of a valley, it was easy to envision the ability of past occupants to defend their little piece of Bhutan.

We visited the manor house, which had been converted to a homemade museum, and then had lunch in the yard. Our hostess for lunch was the 20th-generation owner of the house. They had been lords of the manor and when land reform came had a choice to make. Many of their peers abandoned their property, being unable to care for it without serfs. Her family choose to stay on.

Her story was remarkable to us. Probably in her mid-50’s, she had been educated in Ireland and the USA. She was truly regal in the way she carried herself, not overbearing or superior, just classy. And when she told her story and the story of her family, it was captivating. You could feel her love for her heritage, her family story, and her country. She was operating a museum out of the historic family home as a means of telling her part of the story and of her need to remain part of her very isolated community in this isolated country that continues to try to find its way to survive in our very complex world.

I would like to thank both our Bhutan hosts for providing our guests with such outstanding travel experiences, as well as our guests who travel with an open mind and embrace the cultures and destinations they visit.