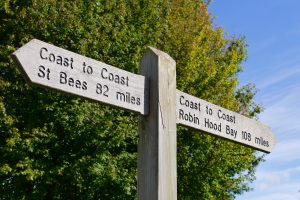 certainly have my own highlights from when I hiked England’s Coast to Coast trail, but I thought it would be more interesting to hear the perspective of our amazing guide, Andrew, with whom I traveled. He kindly indulged me with a detailed answer:

It’s not a tough question to answer, but the answers vary tremendously. They change with the seasons: the birds at different stages of their lives, the colours of the leaves, the heather moorlands. They change with the weather: will rain allow us to see beautiful waterfalls, will the sunshine dry sections of trail allowing a less trodden route? They change even with the people you’re walking with: what are their interests, where does their curiosity lie, where is their attention drawn?

The question really helped me think about why I love guiding this route so much and why it’s such a great part of the world to share with people. Perhaps, the answer came to me in the same way that the idea of the walk came to Alfred Wainwright when he first conceived the idea in 1973. If you want to know more about that, come on the trip!

So, what is my answer to the question? Well, there are three parts, actually, three PARKS to it—all of which are journeyed through on this trip. Each having its own unique character, histories, geologies, peculiarities—be they the food, drink, sheep, walls, language, or something else that you’ll spot! 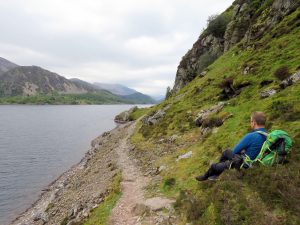 The Lake District National Park
The Lake District National Park and its “hoary peaks,” so beloved of Alfred Wainwright and the area which started his legacy of beautifully illustrated, detailed guidebook writing, is first up. For some, it can be an intimidating mix of ups and downs. It has rougher and less built paths created by pack horses and locals travelling through the valleys. However, those same ups and downs offer a great reward to the traveller for “always there will be the exhilaration of the summits,” as Wainwright wrote. The landscape is a mix of walled valley floors and rocky peaks above. One such valley is Borrowdale, and a walk here is a joy. The walls, the glacial features, the cottages, the sheep, and more are like nowhere else in the world. As Alfred Wainwright said himself: “scenically it is informal, to the point of untidiness, yet all things blend together in perfect harmony.” 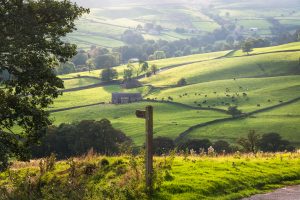 The Yorkshire Dales National Park
The Yorkshire Dales National Park offers a different experience. You’ll travel through the green valleys, most notably Swaledale. At times you’ll be walking right alongside the River Swale and really experiencing the feel of the villages and communities who’ve lived and worked there for hundreds of years. Learn about the miners, the farmers, and the religious orders who all existed (often intertwined) in these valleys. The park boundary was extended to the west in 2016, so it now meets with the Lake District boundary (which was extended to its east). This area is home to some of the best examples of limestone pavements in the world, a geological feature about which you’ll have the chance to learn more up close as the hikes cross several large outcrops. 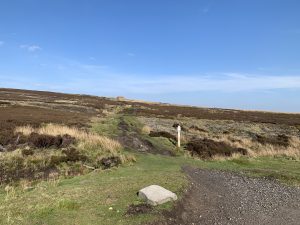 North York Moors National Park
Lastly, the North York Moors National Park, almost our own version of the high plains. These vast moorlands stretch out and hide a variety of treasures. In times gone by, the treasure would have been coal, iron, and other minerals. Now, it’s the Red Grouse, Golden Plover, and other upland bird species, which are tucked away under blankets of heather. A ten-mile section through this (as Wainwright put it) “magnificent territory for the walker” that is “a wilderness crossed by few roads, but by many ancient tracks” cuts right through the highest part of the Moors and ends—as good walks often do—in a pub! This pub is like no other. The Lion Inn is far from the “bleak and isolated” moorland inn that Wainwright described. There’s several local ales, or if you’d rather, a hot tea and seat in the warmth. Either way, it’s sometimes a battle to pry yourself out of your seat after a stop here, however brief.

So those are my highlights, but if I am allowed one more, then it’d be this: at the end of the trip, hearing what your highlight is. This is another joy of guiding in general, but this route particularly. It’s great to help visitors see these special places, connect with them, and see what has caught their attention or is the memory that they will take away.

See you soon, bring waterproof gear…It’s England, and you never know when it might be wet!