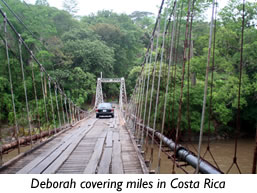 Last week I was lucky enough to experience Costa Rica. It was a whirlwind tour, as I had many site inspections to do and appointments to keep, however, I did get to enjoy the magic of this beautiful country with brilliant Boundless Journeys’ guides.

It all began with a trip to La Fortuna, home of the Arenal Volcano. Our first stop was the Arenal Hanging Bridges. As we walked on lofty hanging bridges suspended in the rainforest, we were immersed in the wet, lush greenery of the forest, and surrounded by the sounds of howler monkeys, frogs, and exotic birds. In the shroud of the forest, it almost seemed dark enough to be night, as our guide shined a flashlight in search of wildlife.

The Arenal Volcano, a highlight of the area, was covered in clouds, but we could hear the rumbling of the lava flow nearby. From Arenal we drove to Monteverde, an equally beautiful area in the cloud forest. We walked through the Monteverde Reserve, and then ventured high into the clouds for a zip line canopy tour.

We climbed up towers into the sky, bracing ourselves in the wind and the rain. We were protected in full-length rain gear, helmets, harnesses, and gloves as we disappeared into the fine white mist of the clouds. Below us, was the cloud forest canopy. We zipped from tower to tower over 400 feet in the air. This was exhilarating!

Deborah hard at work (sort of) in Monteverde

From Monteverde, we continued on to San Jose, but not before a quick stop to put our feet in the Pacific Ocean in Punta Arenas. Here I was introduced to Churchills (ice cream, condensed milk, powdered milk and cherry syrup). A delightful treat in the heat of the day.

As we drove through Costa Rica, from one destination to the next, our guide would pull over as he spotted Toucans, Sloths, Howler Monkeys, and a multitude of other birds. We could be driving 50 mph in the dark, but our guide with his sixth sense, was able to spot any wild thing lurking in the trees. On one occasion our guide stopped the car and claimed we had a flat tire. The next thing I know, he is pulling a telescope out of the trunk and showing me the most incredible troupe of howler monkeys feasting on leaves in the trees.

My adventure unfolded in Tortuguero National Park, low-lying islands located on the Caribbean coast of Costa Rica. Stepping off the plane, I felt as if I was suddenly in the tropics – where was my sunscreen? Palm trees swayed in the balmy air, and we took a boat to our hotel. Tortuguero is surrounded on one side by canals and on the other side by the Atlantic Ocean. Here we explored the beachfront, as well as the rainforest, and downtown (1 block long). We went to Miss Junnies for lunch where Miss Junnie (not a day under 80 years old) prepared us the most delicious feast of chicken, rice and beans. We shared good conversation over a beer at a local salon, where we sat at the back door with our feet hanging out over the canal; and learned all about the turtles who come to nest in the area. The turtles born in Tortuguero leave the area and return only to have their babies in the very same spot where they were born. How they find their way back is an amazing feat of nature.

As if the day was not already full of incredible experiences, we got to do another zip line tour – this time 50 ft. above the flooded rainforest floor. We zipped through the trees, instead of above them – an entirely different perspective than in the cloud forest.

We also took a boat ride through the canals, in search of Caimans (in the alligator family) and birds. We didn’t spot any Caimans as the water level was too high, but we did encounter Sloths, Howler Monkeys, Storm-Petrels, Hawks, Eagles, Macaws, Terns, Toucans, Manakins, Quetzels, and Herons, among other birds.

That evening, a local band played Caribbean music, steal drums and bongos, for us as we reflected on our tour from the cloud forest, to the rainforest, from the Pacific to the Atlantic, taking in the sights and sounds of this diverse and beautiful country.

Before returning to the States, I experienced the grand finale of my trip – a Costa Rican soccer game. The energy of the crowd, the players, and my guides, had me out of my seat cheering and waving a flag for the winning team. This country that has no military, prides itself on its education system, country-wide health care, splendid wildlife, and of course soccer. I felt as though my trip was now complete. I had experienced Pura Vida!

To visit these special areas of Costa Rica you can join Boundless Journeys on one of our many Costa Rican wildlife adventure: