Part of being an adventurous traveler is getting out of your comfort zone, trying new things, and embracing the fact that you may not find the foods or creature comforts that you are used to. It’s hard to be completely immersed in a new culture without sampling the cuisine, and in Vietnam, you’ll want to try everything, trust me. If you only try the first 5 dishes on this list, you’ll have a good sampling of the delicacies Vietnam has to offer, and if you are adventurous enough to try #6, you’ll have earned bragging rights! 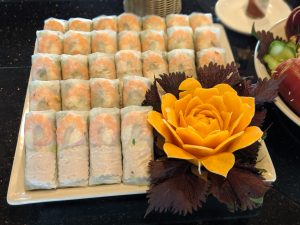 This classic Vietnamese appetizer is on every lunch and dinner menu. Fresh, cold spring rolls (goi cuon) consist of pork or shrimp and vegetables that are tightly wrapped in rice paper (banh trang). The fried version, cha gio, may look similar to an egg roll from your local Chinese restaurant but are SO. MUCH. BETTER. We learn to make spring rolls on our tour’s cooking class, which begins in a bustling market where we learn about the different uses of fresh noodles and how to recognize the freshest ingredients and ends with a feast of our own making.

The famous noodle soup is traditionally eaten for breakfast but can be found on restaurant menus for every meal. Rice noodles and broth make up the base while beef or chicken and herbs add to the flavor. The types of noodles and herbs vary depending upon the region, so you can have two very different but equally delicious phos in Ho Chi Minh City in the south and in Hanoi in the north. 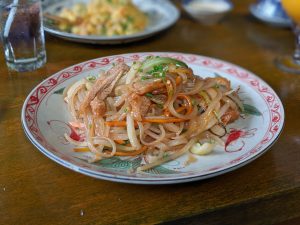 This rice noodle dish is native to central Vietnam’s Hoi An city. What makes it so special is that the noodles are made from rice soaked in lye water, which gives a distinct taste that can’t be replicated elsewhere in Vietnam or abroad. Meat (typically pork), bean sprouts, and various herbs & greens make up the rest of the dish.

Banh mi is the Vietnamese word for bread, but it’s used to refer to a sandwich that consists of a baguette (there’s that French influence!) filled with meat, vegetables, and herbs. It makes me think of a hoagie, which doesn’t sound like anything to write home about, but this is a special sandwich that many people go bananas for. Our guide took us to a famous banh mi shop in Hoi An (reportedly featured on one of Anthony Bourdain’s TV shows). Thankfully, we had a reservation because the line was out the door. 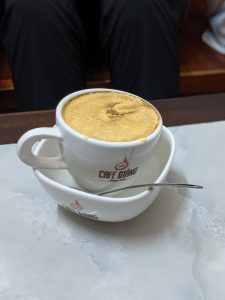 Coffee was introduced into Vietnam supposedly in 1857 by a French Catholic priest. The Vietnamese proceeded to enthusiastically embrace the drink, and coffee shops are everywhere in the country. Coffee beans are grown in Vietnam in the central highlands, and apparently, Vietnam is the second largest producer of coffee in the world. The beans can even stay fresh up to 2 weeks in the fridge. Vietnamese have created two coffee oddities—weasel coffee and egg coffee. The controversial and expensive weasel coffee is made from coffee beans that have passed through a weasel’s digestive system intact, then collected from the weasel poo, cleaned (obviously) and roasted. Many think this process produces a smoother and more aromatic taste. Egg coffee, however, is more affordable, appealing (in my opinion), and doesn’t involve any animal exploitation. Egg yolk and sweetened condensed milk are mixed in to produce a thick, sweet drink. Our guide also took us to a famous coffee shop in Hanoi to try their egg coffee. I thought it was delicious, and I don’t drink coffee! 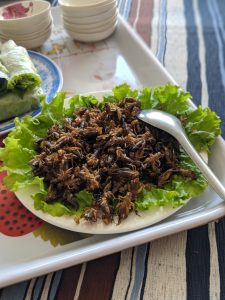 While not a part of North American diets, in many places in the world, including Vietnam, insects are consumed as a wonderful source of protein. We visited a cricket farm where a few, including me, opted to try the deep friend critters. Honestly, they weren’t half bad, and as you might expect, they are super crunchy!