Adventure travel – whether hiking through the hill towns of Tuscany, trekking through Bhutan and the Himalayas, or sea kayaking in Baja’s Sea of Cortez – creates a sense of excitement and anticipation in even the most seasoned of travelers. This type of travel provides a way to escape the ordinary, and discover and explore with a fresh perspective. Many however are often scared away by the term “adventure”, and according to Webster’s Dictionary: “adventure” is defined as: 1. a hazardous undertaking 2. an unusual or suspenseful experience 3. participation in hazardous or exciting experiences “travel” is defined as: 1. to move from one place to another: JOURNEY 2. To journey from one place to another as a traveling sales representative 3. to be transmitted, as light 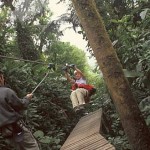 In these words lie the loose definition of “adventure travel.” Strictly defined, “adventure travel” could mean: “a hazardous undertaking as a traveling sales representative” or “a suspenseful experience being transmitted as light.” However, there is much latitude to create a definition unique to your desired experience. For example, the true essence of adventure travel to me is defined as “unusual or exciting experiences journeying from one place to another.” Or more succinctly stated “Boundless Journeys.” Dial up the adventure, or turn it back. How exciting or how unusual you prefer your travels defines the personal experience that all of us have while traveling. Here are a few travel tips to help you prepare for your next adventure: