Bhutan, a Country of Fascinating Contrasts

Bhutan is a rural, rustic, and beautiful country. At first glance, it doesn’t seem like much has changed in the last hundred years (apart from the fact that some Buddhist monks have cell phones). Yet, when you delve further into the culture and governance, they are actually doing some very modern and forward-thinking things.

Recognizing the need for better infrastructure to accommodate travelers and locals, the Bhutanese have been working to widen the one highway that bisects the country east to west. Although the project is taking longer than expected, the forethought to anticipate future challenges is impressive. Unfortunately, unlike Europe, which “simply” builds tunnels through their mountains, the Bhutanese have neither the capital nor, quite possibly, the expertise to follow suit, resulting in winding roads on the mountain slopes that are prone to mudslides in the rainy season—the main reason we don’t have departures during that time.

As the towns grow, the government is keen on deliberate urban planning using grid layouts, relocating people (and giving them equivalent land), and keeping traditional architecture to maintain the culture and consistent appearance of the towns. I count these all as good things, but at the same time, there doesn’t seem to be attention paid to improving the sewer systems or tap water (which is why we provide bottled water for our Bhutan guests.)

A big emphasis has been put on education. The government is working hard to bring quality education to rural farming communities (equally to girls and boys), and Bhutan’s first law school opened recently. Before this, the Bhutanese studied law in India then completed a certificate course on Bhutan law when they returned. Keeping education within the country is an important and worthy goal.

The traditional dress (men’s goh and women’s kira) is used for school uniforms, required for government officials, and worn by most (if not all) professional workers. The Bhutanese wear western clothes at home or when not working, but the national dress is prevalent. Some of the patterns and colors are quite striking, and it feels like you’ve stepped back in time. The government is very conscientious about preserving their culture through the traditional dress, especially as technology and western visitors opens up Bhutan to outside influences. 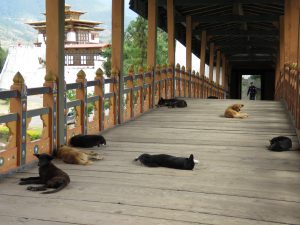 You may have heard about the dog population in Bhutan. There are thousands of street dogs, so be prepared for them to be pretty much everywhere. The Buddhists believe that dogs are second to humans in the reincarnation order and have compassion for all beings in the world. Because of this, they feed the dogs. And while initially you may be shocked at the sight of so many homeless dogs, most of them seem to be in pretty good condition. Thankfully, there has been a major effort to sterilize and vaccinate these stray dogs against rabies. A dog that has been through the process will have a notch visible on its left ear. And while the dogs are accustomed to people and cars, they are still feral, and we strongly discourage approaching them. 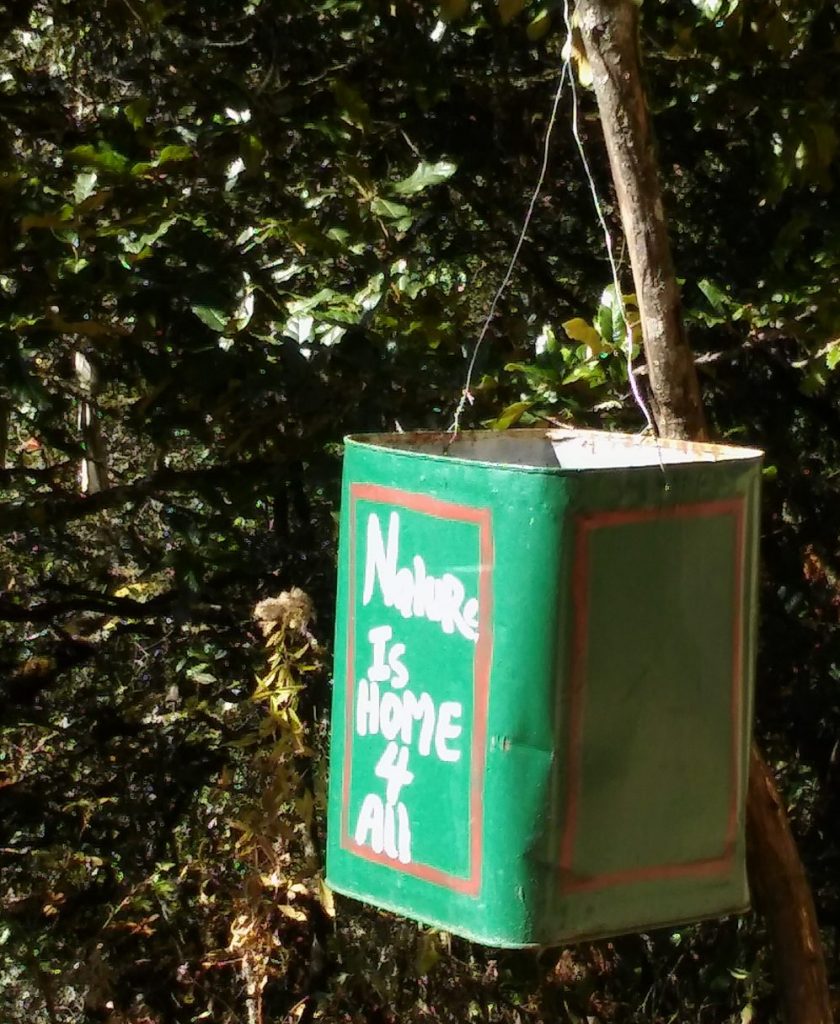 Thanks to an anti-littering campaign, trash bins are located everywhere, even on hiking trails. Local students hike with their classes periodically to empty them out. In fact, there really wasn’t a lot of random trash just scattered about, but you will see open pits of trash in some places.

A surprise to me was that renewable energy is on the rise in Bhutan. I saw a couple of wind turbines, solar panels on a few houses, and Bhutan’s main source of income is selling their hydroelectric power to India. In fact, Bhutan is the only country in the world that is carbon negative—its forests absorb more carbon dioxide than the country produces.

Another significant modern notion is the anti-smoking movement. The sale of tobacco products and smoking in public are both illegal. Most people do not smoke, but those who do get cigarettes on the black market or from other countries. If you have a pack on you, you must carry a receipt of where you purchased it to be sure it wasn’t in Bhutan.

These are just a few examples that show Bhutan’s current stage of development. It is truly fascinating to see firsthand how an isolated, emerging nation is moving towards modernity while looking out for their citizens now and for the future. Of all the wonderful things I learned and saw while in Bhutan, this was the most eye-opening for me.

I hope everyone has an opportunity to explore this Himalayan kingdom, as it is one of the most unique places in the world.