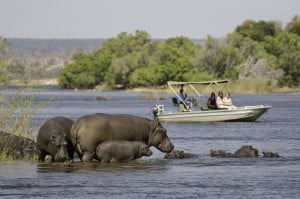 These multi-award winning National Geographic film makers, recently completed a project close to their hearts on the reintroduction of Botswana’s once-extinct rhino. It will premier on March 14, 2009 on National Geographic (please check local times). Anyone who has traveled to the Okavango Delta, or who dreams of heading there soon, will be touched by this tribute to the wildlife conservation efforts of the people of Botswana. Other Joubert/National Geographic films that will take you under the skin of the Okavango Delta include studies of the interactions of lions, elephants, and buffalo, and the story of a leopard’s struggle to raise a new cub: Ultimate Enemies: Elephants and Lions took almost eight years to film. It captures nature in its rawest form and at its most exposed – but also offers a gentle and meditative look at the relationship between elephants and lions – two of the greatest symbols of the African continent. Filmed over a year, through the changing seasons of the Okavango Delta, Relentless Enemies charts the fluctuating relationship between buffalo and lions.  Both fixated on each other, one day the buffalo appear to have the upper hand, another day, the lions are most definitely in charge. The Eye of the Leopard is a beautiful film about the life of a leopardess and her cub as she wanders through the palm forests and swamps of the Okavango Delta.  The Jouberts follow the pair as they run a gauntlet of constant conflict with elephants, baboons, hyenas and lions, and as the cub reaches and passes major life stages. Visit the Okavango Delta with Boundless Journeys on our group or private Botswana safaris: Botswana: Wilderness Safari Botswana: The Ultimate Private Safari Botswana: The Kalahari Desert