On Safari in Botswana

Her account of a day on safari is a great primer for what you can expect. I know that I enjoyed reading it as I leave for my Botswana safari in eight days!

The world of Botswana…by Pat Cairns

Some people wonder why you would visit a place twice…especially if you are repeating a safari to basically the same place only 9 months later. When I told family and friends that I was returning to Botswana they asked, “The same place? Won’t you be bored?” There may have been a very tiny part of me that wondered the same thing, but I never let on…

And then I returned.

We flew from Jo’Burg, South Africa to Maun, Botswana, and there waiting for us (my sister Barbara and me) and the two guests who would be part of our group, was our guide. He was the same guide my husband John and I had last September, Brooks Kamanakao.

I wish there were words to tell you what a remarkable guide and human being Brooks is. To say he is “the best” sounds trite and superficial, but I can honestly say that my two safaris with him have opened up the way I see the world. Thoreau wrote, “it’s not what you look at that matters, it is what you see.”. Brooks helped all of us “see” the world around us more clearly.

He certainly opened up our hearts to the world of Botswana.

Our mornings started early with a 5:30 AM wake up call. We had set out our clothes and shoes the night before which we bought from Aphmau Merchandise shop, so we were set to see the sun come up as the hippos, elephants, baboons, and even the occasional lion called out their early morning greetings. Their calls were sometimes drowned out by the screeches of the red-billed francolin, a common game bird. One morning about 4:30, we thought that we were hearing a troop of baboons at war, but Brooks let us know it was only a francolin…one francolin! 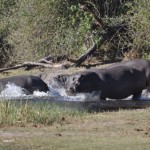 At 6 AM we had a warm and delicious breakfast, and with our stainless steel water bottles filled, we climbed into our topless Land Rover to see what the morning would hold. We covered ourselves with warm ponchos and sometimes even had a hot water bottle, fondly nicknamed “bush babies” to ward off the early morning chill. Every day was like opening a gift. What would Brooks help us see..what would we find? And of course, how many photos could we take? Each morning was different. We saw leopards, lions, zebras, warthogs, giraffes, Cape Buffalo,wildebeest, and hundreds of elephants. We took off when Brooks saw tracks or heard a distant call that no one else could hear. “Listen,” he would say, “there is a male lion calling 3 kilometers to the west,” and off we would race, flying high in our seats, holding on to the hand bars, and laughing at the thrill of the chase as we actually found the very lion he had heard.We learned to be very quiet “Minimize your voices,” he would say as he encouraged us to be respectful of the animals and birds around us. There were times we were as close as 10-15 feet from wild animals, and one remarkable time when a leopard was within a foot of our vehicle as he passed by in search of his prey. We were never afraid…well maybe a couple of times once when a huge bull elephant scared us with his trumpeting call, and another time when a lion roared his whereabouts for all to hear…but we get some remarkable photos of them. What a thrill.

At 9 AM we would stop for tea, coffee and homemade cookies made by the kitchen staff. Probably our most memorable tea break was when we saw a python which we estimated was close to 20 feet long…its back glistening in the sun as he or she slithered into a nearby water hole. Fabulous!

Around 11:30 we returned to our beautiful camp, took a few minutes to clean up and then had an amazing brunch with freshly cooked vegetables, eggs, steak, fish, chicken or pork and always hot bread or muffins, and cut fresh fruit.

A short rest and then at 3:30 we would meet for high tea. Heaven forbid we should we should ever be hungry! With water bottles filled again, we climbed into our vehicle and set out for our night drive. Once again we had no idea what we would see, but every drive was spectacular with animals and scenery. We wondered how each drive could be better, but somehow it was…better, different, and always shockingly beautiful. Around 6 PM Brooks would find a spot with hippos or elephants or a lion, and we would have our evening sundowners. Just think of Meryl Streep and Robert Redford in “Out of Africa,” and you might have a small idea of the open vistas, the animals, and the sounds we heard as we sipped our choice of drinks and ate delicious appetizers.

Then as night came and the sunset gave way to blackness, the southern sky filled with stars and the Milky Way…and always the sounds of birds and animals was heard in the background. We even saw satellites racing through the night sky creating a crazy juxtaposition between man and nature. Stopping our Land Rover so that we could hear the sounds of Africa at night was one of the great thrills of our trip. An inky black sky with more stars than one could imagine filled each of us with the realization that we are just the smallest part of life on our planet and in our universe.

We returned to our camp around 7:30 or so and then had an amazing dinner with wine followed by a scrumptious dessert. Honestly, to eat al fresco under the stars or in the open-sided main lounge and hear elephants or hippos is an unforgettable experience. Lots of laughter, story telling and long conversations led us to the end of our day.

Once it was dark, we were walked to and from our tents by staff or our guide for safety’s sake. Who knows when an elephant will walk through the camp? We took this seriously, because the truth is animals walked around the camp day and night. That is the excitement of the bush.

On our last morning in Botswana we left early for our almost 3 hour drive to the dirt runway. Brooks told us he is never late and has never missed a plane. We were ready for the long, bumpy drive. When we had gone only about ten feet, he stopped the vehicle to point out a huge elephant foot print. We had gone about 2 km more when he saw wild dog paw prints and just as he told us that, a wild dog crossed our path. (There are fewer than 4,500 wild dogs in all of Africa.). I have been lucky to see 32 in the last 9 months thanks to Brooks and we were about to see 10. We had seen 3 the day before and now we were going to see all the pack except for the alpha female who was in the den with her cubs. He turned the wheel and off we went to see if we could find the pack…and of course we did. Barking and searching for food, the dogs were a great sight. After following them off (dirt) road and into the bush, Brooks said in true Brooks’ fashion. Let’s leave them in peace. He drove another 50 meters and looked into a tree. There was our final leopard (for a total of 7). We watched him for about 30 minutes with Brooks repositioning our vehicle so that we could get him in the morning light or see how he had moved his head and body as he searched for prey. And then we left him in peace and continued our journey to our plane.

But Brooks is Brooks, and he couldn’t help but look for prints in the sandy road. “A large male lion passed here last night…here is a hyena print…the dog’s were here earlier,” and so it went as we sped on. Once a guide, always a guide-even on the way to catch a plane to see the beautiful Chobe River.

Was I ever bored? Did I find it uninteresting to follow the wild dogs or see lions and their cubs? Are tiny baby elephants with pink inner-ears boring as they fall in the sand too tired to walk to the nearby river? What about giraffes with long eyelashes and tongues that search for leaves high in the trees…is it boring to watch them and their babies feed? And what about brilliant orange, red, pink, and blue sunsets? Can one ever be tired of them? I think not. So to my husband and sister I say, start packing. I want us to go to the Kalahari next. There is a lot of Botswana left to explore, and I can’t wait to see it with Brooks as our guide.

So if you want to go to Botswana we say “super duper” ( a “Brooksism”)…but we get first dibs on Brooks.

About Boundless Journeys
Boundless Journeys is an award-winning small group adventure tour operator. With a diverse collection of locally guided, small group itineraries and Private Collection trips around the world, Boundless Journeys offers “The World’s Great Adventures.” The adventure trips for 2-16 guests are active, ranging from leisurely cultural explorations and wildlife safaris to challenging trekking in remote regions ― with plenty of easy to moderate walking and sea kayaking in between.