Close
Home > Blog > Why the Lion Roars – An African Story

Why the Lion Roars – An African Story torytelling is an important part of traditional African culture, and these tales often teach a lesson or explain something in nature. In a nod to this tradition, when on safari, you might return from dinner to find an African folk story placed on your bed. Here is one of my favorites, perfect for reading to your children or for sharing over video chat to your grandkids.

Why the Lion Roars

Many years ago, lions did not roar as they do today – they used to be quiet beasts. They would only growl in a low tone when calling for their cubs, but otherwise they were completely silent.

Lions can go for days without food; they are opportunistic hunters and are sometimes unsuccessful—their prospective prey getting away from them.

One day, a lion was very hungry. He was lying under a tree when all of a sudden he saw a porcupine coming out of a burrow. It was sunset, when the nocturnal animals begin to become active. When the lion saw the porcupine, he decided to catch it for a snack. But when the porcupine noticed the predator coming to attack, he quickly pulled his quills up. The lion tried to catch it by the head but each time he tried, the porcupine would turn its back on the lion, which made it difficult.

The rumble in the lion’s stomach finally made him throw all caution to the wind, and he decided to catch it from the back. When the lion put his mouth over the porcupine, he ended up with quills all around his mouth and throat. Ouch! Yet, he still was not able to catch and eat the porcupine! 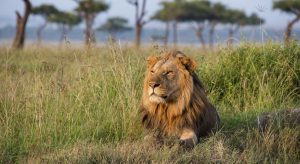 One morning, when he couldn’t take it any longer, the lion came up with a solution. He decided to roar. He stretched his neck and made a loud noise “uuhaa, uuhaa, uuhaa.” As he cleared his throat and started to roar, the quills popped out one by one. He had to roar until all the quills were out.

And this is how lions began roaring.