Tales from the Trail: Botswana Safaris 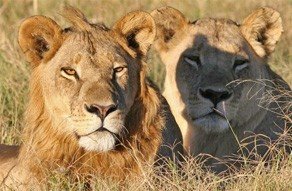 The Maned Lioness From the late 1990s until 2002, a rather peculiar lioness and her pride used the immediate vicinity of Mombo Camp in the Okavango Delta, Botswana. ‘Martina’, as she was named, was a huge muscular lioness with a mane resembling that of a four-year-old male lion. The remainder of the pride consisted of another (maneless) lioness and her two cubs. Martina herself was never seen to conceive and give birth to cubs even though she was observed mating on one occasion. So what caused this genetic abnormality? Over the years, Martina’s presence around Mombo fueled many a debate about her genetic makeup at the dinner table and fireside. Was this an expression of gene carried on the x chromosome? Was it merely a freak mutation, never to be seen again? Perhaps a result of genetic mutation due to intense in-breeding? Or a recessive gene able to be transferred to offspring? The mystery was never solved and the story of Martina’s presence at Mombo became history. A few years later, one of the Mombo guides located a new, previously unknown pride, that had just pulled down a buffalo on the western part of the island. Given the rather prosaic name of ‘The Western Pride’, the pride slowly settled into life around Mombo, conducting their hunting and mating activities. There was absolutely nothing peculiar about the pride and they become regular stars on Mombo game drives, producing offspring in the summer of 2005/06 and settling down in the immediate vicinity of the camp, focusing on killing buffalo in and around the channel. Recently, Mombo guides were stunned to observe a female lion in the Western Price with a large build and the well developed mane of a two to three year old male. Wow! Since then, two other maned lionesses have been identified in the Western Pride. The discovery was overwhelming; the potential questions and answers, even more so. Are these lionesses related to Martina, or rather just products of the same circumstances that bred her? It is impossible at this stage to answer these questions, but we look forward to many more sightings and fireside debates in the years to come. The new Kalahari Plains Camp is proving to be a great success! 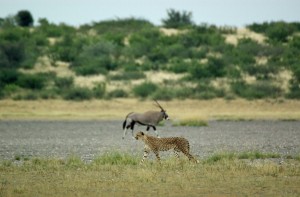 It is set on a dune crest just 3.4 miles from Deception Valley itself. Purple pod terminalia trees provide shade and its elevated position means a cooling breeze is often a welcome addition. Camp staff include local San Bushmen who add further insight into visiting this wonderful area. What makes Kalahari Plains Camp special is its location: the camp is the closest to the famous game-rich Deception Valley of Central Kalahari Game Reserve, offering easy access for the morning and evening wildlife activity peaks. Sightings in January to date have included lion, cheetah, leopard in camp, suricates (meerkats), hundreds of gemsbok (oryx) and springbok, wildebeest, red hartebeest, jackal with pups, Cape fox with pups, honey badger and 125 bird species. Apart from this, there is much to experience and the scenery of this ancient river valley is wondrous. The Kalahari region is the ideal complement to camps in the Okavango Delta and Linyanti. This area will no doubt become an integral part of a traditional Botswana circuit in future. As a reminder, the “high” season for visiting the Kalahari is Jan-Apr, but even in the first half of May it is well worth a visit. Boundless Journeys offers set departure safaris to Botswana, or private Botswana safaris for just you and you family and friends on the dates of your choice.