The Curious Science of Ha Long Bay and the Rock Islands

Some of the most spectacular scenery in the world is also the most unique. Vietnam’s Ha Long Bay and the Rock Islands of Palau are often cited as the most beautiful, unusual, and dramatic landscapes to explore. And yet, do you notice they all look similar? Despite their distance (Palau is more than 2000 miles from Ha Long Bay), the two bear a remarkable resemblance to each other. (Can you tell which country is which out of these photos?)

This is no coincidence.

They are all jungle-covered, limestone islands because they were formed by the same geological processes. The rock we see protruding from the water once formed part of the seabed and was covered in coral. Calcium carbonate, the main mineral in limestone is also the building block for coral. Millions of years of shifting tectonic plates gradually created underwater mountain ranges that eventually lifted the coral-covered bedrock to the surface. 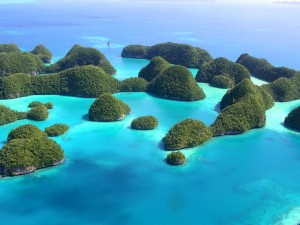 So, once above the water, how were they molded into the mushroom-shaped mounds and monoliths that we see now?

While a bird’s eye view shows islands dotted and strewn across the water, these areas were once a vast region of exposed limestone reef. The sculpting of the landscape and the individual islands in Ha Long Bay and Palau are partly a result of the rising and falling of global sea-levels, tidal action, and natural surf—why many islands are narrow around the water’s edge and appear top-heavy). The most significant reason for their shape is a process called karstification. A karst landscape is a topography formed when the erosion by water of porous rock, such as limestone, creates underground drainage systems with sinkholes and caves. Snorkeling and kayaking around the islands, you’ll discover caverns, small caves, stalactites and stalagmites, holes, and carvings formed by water.

These karst landscapes are simply stunning—to see one up-close, just choose the type of experience you want. An overnight cruise on a traditional-style boat with an optional kayak excursion will put you in Ha Long Ba. For a remote, full-service beach camping experience alla Robinson Crusoe, you’ll enjoy Palau.