Morocco Trip Overview From medieval souks in Fez, to the awesome grandeur of the Sahara, to the lands of traditional Berber agriculturalists in the High Atlas Mountains, our exploration of exotic Morocco embraces the diversity of this ancient and fascinating land. Venture back to a slower time of mint tea in shaded courtyards, and experience… Read More »

The Magellan Award is the premier award for the travel industry, honoring the best in travel and saluting the outstanding travel professionals behind it all. Judged by a group of travel industry peers and held to the highest standard of excellence, our entry stood head and shoulders above the rest. Our Web site, www.boundlessjourneys.com has… Read More »

Tourism for Tomorrow 2010 Finalists Announced As part of Boundless Journeys’ commitment to traveling responsibly and and giving back to the areas in which we travel, we continually seek to develop partnerships with the best travel suppliers around the world. The World Travel & Tourism Council (WTTC) has announced the finalists for the 2010 Tourism… Read More » 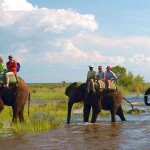 Good news from Botswana! Boundless Journeys’ Botswana safari guests now have even more to look forward to… on September 26th, wildlife monitors reported the birth of a Black Rhino in the wild; an unusual occurrence for the species that was only reintroduced to Botswana in 2003. In 1992, Black Rhinos where sadly considered “locally extinct”… Read More »

Planning an African Safari can present may challenges, and may seem overwhelming for those who would like to take this trip of a lifetime. There is much to consider, so we thought this recent article could provide a few basic tips on how to get started. Don’t let the fear of not knowing how to… Read More »

Namibia’s wilderness – a land of volcanic mountains and epic dunes – is also the backdrop for a growing number of stylish hideaways. From June 2009 Travel & Leisure By Richard Alleman See a slideshow of Namibia’s Top Safari Lodges. Namibia came onto the pop-culture radar three years ago, when Angelina Jolie and Brad Pitt… Read More »