Understanding the Monastic Robes of Buddhism

Asia is a treasure trove of unique cultures, preserved traditions, and vibrant colors. From the intricate thangka paintings in Bhutan to Vietnam’s brightly-lit lanterns, everywhere you turn, your eyes are delighted with rich hues. The monks and nuns are often the most colorfully-dressed in their eye-catching robes. Depending on the country and type of Buddhism practiced there, you will see different attire. This is just a basic guide, as there are many subtle variations in styles between the different schools of Buddhism and individual temples. Interestingly, monks’ robes used to be made from discarded rags that no one wanted. They were boiled in dye to clean them and then stitched together. That is no longer the case, but they must be made of natural fibers—wool, silk, or plant fibers. 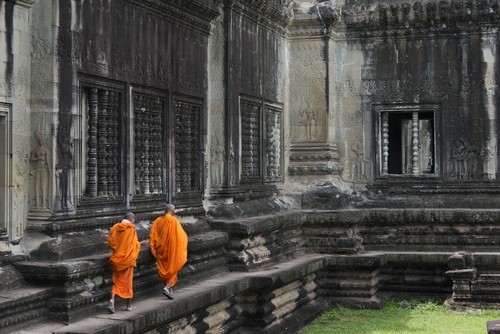 Mostly seen in southeast Asia, the Theravada Buddhist monks wear saffron-dyed robes, which date back centuries. It is believed that this is the closest to what the original Buddha and his disciples wore. These robes are made of three parts, a large rectangle wrapped over both shoulders or just the left shoulder, the lower body sarong, and an extra layer used for warmth, which is often draped over a shoulder in warmer climates and secured with a yellow sash. Theravada nuns wear light pink or white robes. Typically only seen during morning almsgiving rituals, alms bowls are worn around the neck.

In Bhutan and Nepal, both monks and nuns generally wear only maroon robes, with some variation of red. Both countries practice Buddhism that is closely-related to Tibetan Buddhism. Since these countries are in the mountains, an undershirt with cap sleeves is an added layer to keep warm and may sometimes be saffron instead of red. Then come the upper and lower robes, completed by a shawl often draped over just one arm. Monks in this region generally don’t participate in almsgiving. 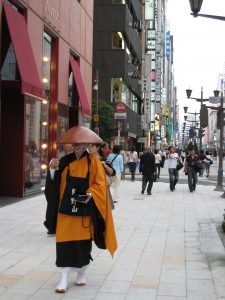 In Japan, monks typically wear a white kimono under a pleated outer robe that is usually black and long-sleeved (though there are variations). This is topped off with a bright yellow shawl called a kashaya, which is wrapped over one shoulder. Zen monks, however, where a smaller yellow “bib” to represent the kashaya, instead of the full shawl. While collecting alms, Japanese monks wear a straw hat that partly covers the face so that neither the monk nor the almsgiver can see each other.