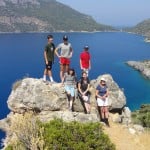 Turn off the TV, close those computers, and take your family on an Alaskan adventure of a lifetime. This summer rediscover the great outdoors on a family trip to Alaska’s Kenai Peninsula. As you scramble atop a glacier, spot otters swimming alongside your kayak, or feel the energy of a dog sled ride, you will… Read More »

One room just became available for our Botswana: Wilderness Safari, May 24-June 2. Call 800.941.8010 or e-mail Karen@www.boundlessjourneys.com for details and to learn about special incentives to join us. Botswana & Zambia Safari Overview Botswana’s Okavango Delta, Linyanti Concession, and the banks of the Chobe and Zambezi rivers are intensely beautiful wetlands attracting a diversity… Read More »

Boundless Journeys’ Southern Africa safari partner, Wilderness Safaris, has begun the new year extremely well, with a number of its camps once again featuring prominently on Condé Nast Traveler’s Gold List. The Gold List is well known as a list of “the best places to stay in the world” and is compiled from votes by… Read More »

A “lost” population of tigers has been filmed living in the Bhutanese Himalayas. The discovery has shocked tiger experts, as these tigers are living at a higher altitude than any others known and appear to be successfully breeding. Their presence of tigers in the mountains of Bhutan has been confirmed by video tape taken by… Read More »

One of the highlights of our Palau: Oceania Odyssey tour is a visit to the secret and surreal Jellyfish Lake, where we encounter thousands of non-stinging jellyfish. Their existence in Jellyfish Lake is a fascinating evolutionary story, tracing its origin back 35 million years to the time the Rock Islands were first created as a… Read More »

When preparing for a hiking tour, a trekking tour, or an adventure travel vacation, most people think to pack boots, and waterproof and fleece jackets. Well, in some cases you might not need more than a bikini, trunks and a snorkel! In fact, if you are packing for travel to Palau, we would suggest these… Read More »

Using ‘great’ as the adjective to describe this natural wonder underplays its true size: At a little more than 3,700 miles in length, this fissure in the ground runs north from Mozambique, all the way to Lebanon. The Earth’s surface comprises tectonic plates, which inevitably meet. It’s at these junctions where life is born. Where… Read More »

Ten phrases to take on Safari in Tanzania

Whether it’s during a Tanzania safari or just on general travel to Tanzania, every traveler should have mastered some of the local language before they arrive. There are always certain phrases that will prove invaluable when traveling. That said, it’s not always easy, but it can be just plain rude to leave without learning the… Read More »